“And those who were seen dancing were thought to be insane by those who could not hear the music.” –Friedrich Nietzsche

Who would have thought I would ever quote someone like Friedrich Nietzsche? Surely this is a sign of how topsy turvy my life has become since answering a call to the wild.

And I have a toenail to prove it. What’s that you say? Let me explain. After 40 years of successfully competing in the male dominated world of Logistics in suburban LA, a lifetime of raising children and cultivating a spousal relationship, all while keeping house, and finally to being sidelined by a devastating auto-immune illness…my time is my own.

I finally have time to listen to the inner voice that had been silenced so long by the manic pace of keeping up with my overdeveloped sense of responsibilities. So what was the first thing that inner voice said to me after a lifetime of silence?

“So what now genius?”

Really? My inner voice is a smart-ass? I should have known.

It has been 3 years since the sudden end of life as I knew it, and I have to say it has been a long lonely road to where I am today. I said lonely, but so deeply satisfying. It’s almost as though my life is beginning to come full circle. Once in a while I can feel the joy I haven’t felt since I was a child, the joy of just being alive. Really alive.

This most certainly has caused me to be out of step with those around me.

I should say MORE out of step with those around me. More out of step than just being the only one of my friends that still has their original boobs, original flooring in their home, has not or ever will have appointments with botox, and now…can’t even get a pedicure, thanks to the toenail that has been lost to traning for The Next Big Thing.

And to add insult to injury, I have discovered that being a Noob is a thing. Not a good thing either. Geez, to think I am a Noob at this age to anything is both gratifying and insulting at the same time.

But the truth is what I don’t know about the outdoors is staggering. And there is not a single survival skill I have learned in my previous life that carries over into this world (ie; being able to find parking in Beverly Hills, being able to meet tight budgets, etc.).

2 years ago I took my first solo trip, up the west coast from LA to Seattle. An epic adventure that started it all. A year ago I started walking. 2 months ago I started hiking. Yesterday my toenail fell off (Oh my gosh…is that normal?).

And beginning in June, this Noob has an epic adventure a month planned for the rest of the summer. And at least half of them are solo. I have truly become a mad baby boomer.

June – The North Rim of the Grand Canyon

And the rewards for all of the aches and pains of being an auto-immune riddled late blooming hiker? Too many to list, but a very tangible one is that my rare disease rheumatologist says in his entire career he has rarely seen not only a halt in my rapid bone loss, but a bone density gain of 10% over where I was last year.

The little engine that could.

I ran into one of my Bunco Club babes at Target the other day. We talked about the summer Bunco nights planned and I realized they were all in conflict with my epic summer plans.  When I stated so, my friend said…”Chris, you are so ADVENTUROUS (I put this in caps to illustrate her emphasis on the word)”.

I am increasingly aware that I no longer belong in the manic world of keeping up with “fill in the blank”, nor do I yet belong in the natural world of the great outdoors. But I am embracing my in-between-ness.

And I understand now why nature calls me.

It does not care what I am wearing, how old I am, or how quickly I can scale it’s mountains. It doesn’t care that I am there, yet while I am it seems to be it’s most beautiful for me.

Nature is not embarrassed for me when I am gasping for breath or fall on my butt. It doesn’t grow impatient as I sit in wonder of it. It impassively awaits me as I work through my terror of heights and falling (there, I said it).

Nature doesn’t laugh when I accessorize my outfit with color. That’s right, I said color. Check out these gloves. 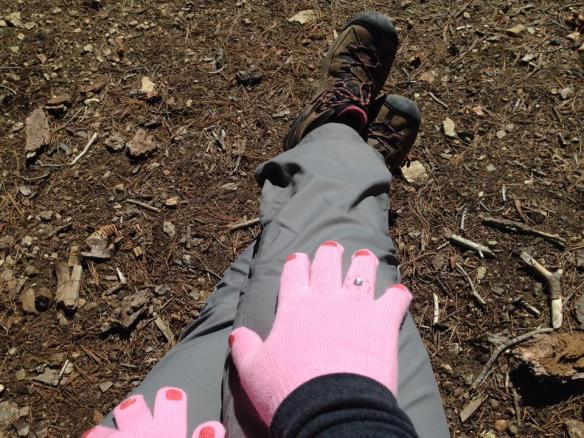 Thankfully Jesus walks with this Noob. So I may be solo, but I am never alone.

If the journey is the destination…then I am already home.

Where I can be found dancing to the music that only I can hear.

Until next time dearest.