I did it. This city girl backpacked.

I knew that I had to pull the trigger on backpacking just so I could answer the question, “am I able”? How can I proceed onto The Next Big Thing if I’m not able to backpack one night alone on the mountain that’s practically in my own backyard?

Obviously I survived because I am writing this post. But just barely.

I made some significant errors in judgment, but you probably already knew I would dearest.

I learned a tremendous amount about backpacking (but to be fair, just driving out of the city with a backpack in my car is new) but unexpectedly and uncharacteristically, the biggest revelations were about myself.

I did a couple of things right;

I chose Mt. Baldy because it’s close and there are no bears (I learned there actually ARE bears, but thankfully I was blissfully ignorant on this subject going in). The downside to this however, is that it is a MOUNTAIN which means my options were straight uphill or straight uphill. 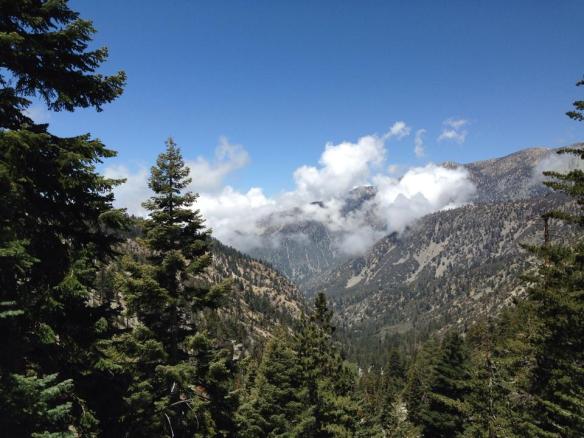 The camp I chose I have hiked to 3 times now (sans backpack) and it is only 2.75 miles from the trailhead where I parked my car, so I would not get lost and could easily bug out if needed. The downside to this is that if you are unable to walk, it doesn’t matter where your car is.

Proud of me so far? Me too. Things began to go downhill from here though (except the trail, as stated earlier).

I had packed my backpack a thousand times in my mind. When I actually did it however; I over packed. In fact, I think I shall change my style of backpacking to be called overpacking.

I’m even boring myself at this point, but you get the picture. Add in all of the hydration equipment (including filter), navigation equipment, sleeping bag, and a book for entertainment and you’ve got a” bursting at the seams” situation. I weighed it on my bathroom scale at 33 lbs without water. I thought that was doable.

I called one of my selfish kids that had a day off to watch Lucy (my little grand dog and BFF) overnight so that I could concentrate all of my efforts on this outing of mine. No dice. Why was I surprised?

So I had to take her with me.

This required more water storage for her and some snacks for later, but I decided she had to carry them herself. I attached her doggy bones in a baggy to her collar with a paper clip and hung her water bottle from the same. Problem solved.

Never mind that little strip of black on her back. She chased a lizard under the car. She’s ferocious like that. 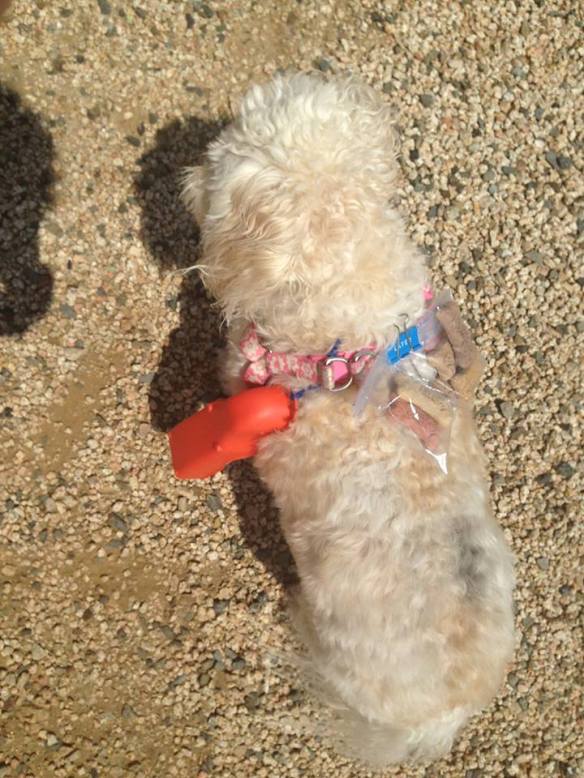 I filled up my hydration bladder with 3 liters of bottled water and was ready to hit the trail.

I was feeling pretty darn accomplished at this point.

I drug my backpack into the car, all the while convincing myself that it wouldn’t feel so bad once I had it properly attached to my body. Ah yes…the optimist self. Where is my pragmatic self when I need her?

I drove up the mountain and parked my Jeep where it would spend the night.

I went around the back, opened the hatch, and sat down in the back so I could strap myself into the overpack (remember that’s what we’re calling it now). How could 38+ (remember I added 3 Liters of water) pounds be so heavy? I had carried children that weighed that much.

No matter…I could do this. I HAVE to do this.

I threaded the handle of Lucy’s retractable leash onto the waistband of the overpack and we were off on our adventure.

By the time we were half a mile in I was aware of the change in altitude, the unforgiving terrain (the first mile in gains about 800 ft. in altitude and includes some rock scrambling), how much longer it was taking than without a backpack (4x as long), and that Lucy looked like a little white fluffy Scooby snack in the great big wild.

At the 3/4 mile mark I hiked down to the stream that ran alongside us and took off the overpack to fill my 24 ounce reserve water bottle and Lucy’s water bottle. Once filled, I realized I would have to carry her water bottle too. She could still carry her snacks, and she got a big drink and cooled herself off in the stream. 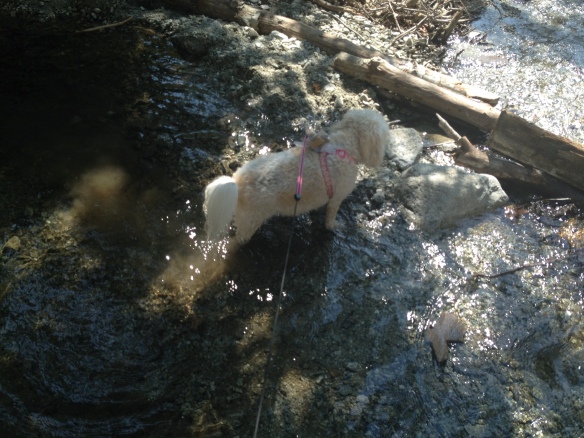 I sat down on the rock and tried to hoist the overpack over one shoulder and “holy crap” was all I could think. It felt like I was trying to strap a recreational vehicle on my back.

At the 1 mile mark I thought (my wimpy self did anyway) maybe I should just cut bait and find a nice flat place by the stream to spend the night. Turns out the wimpy self might have been the prudent one.

I probably should have listened.

I kept pushing myself up the mountain until I finally hit the 2 mile mark. At this time I realized that I am going so slow that I may end up racing the sun. But I kept going.

At 2 1/2 miles I was having to stop and rest every 20 steps or so. My legs and back were in so much pain, my mind was oxygen starved (it felt that way anyway), and I knew there was a possibility that I would not be able to go forward or back. The trail was only 2 feet wide on a ridge so camping there was not an option.

And still the sun was going down faster than I could move.

Every time I had to bend down to untangle Lucy’s leash from around my legs, herself, or my trekking poles with that recreational vehicle strapped onto my back, I became exponentially fatigued.

Even my personal coach self was waxing weak. There is nothing she could say to wring blood out of this tired turnip.

Then out of nowhere the seldom present “bad ass self” took over. Evidently she is a mad hiker, ’cause I heard myself yell “FUCKER” every time the camp was not just after the next bend like the personal coach self kept promising.

When I felt the need to rest after just 10 steps…the bad ass would yell in my head, “no way…you CAN’T rest your fat behind and make it before sunset. Keep going.”

So I kept going. Who knew this abusive bitch would be the one to get me to push myself so far beyond my limits? Never mind, the title of this blog says it all.

The bad ass promised I could drop my pack as soon as I saw the campground sign, and that’s exactly what I did. The sun had set, there was a little light in the sky, but I still needed to drag that overpack up a little bunny hill to my camp site.

I couldn’t do it. My legs were shaking, I was dizzy every time I stood up, my mind and body were exhausted by the superhuman struggle to get this far. I just wanted to lay down in the dirt and give up the ghost.

Thankfully, there was no one else around to witness that I had become the psychopath on the trail.

I disengaged my tent and tarp from the overpack and drug it up the hill. I picked up a small rock to pound in the tent stakes and could barely lift it far enough to bang it back down. It was not enough to drive them far, but I didn’t care.

As soon as the tent was up, Lucy and I fought to be first to get into it and lay down. A couple of chubby bitches that had been pushed too far.

I made myself get up and zip Lucy into the tent so that I could finally work without the leash.

I picked up the overpack and forced one last push up the bunny hill.

It was getting dark, and there was no moon. Crap.

I found my headlamp and switched it on. Then promptly broke the strap. Now I was working with one hand, but no matter. The hard part was done, the tent was up and my pack was in it. I would spend the next 2 hours unpacking what I needed and cooking my dinner of Top Ramen.

When my head finally hit the jacket (my pillow), I was grateful for the book because of the cacophony of sound coming from crickets and other insects and/or amphibians. There was an owl “who-who” ing in a tree overhead. I remembered my Grandma telling me that if an owl whoots only three times, someone in your family will die. If it is more than three, it is a lucky omen. So I started counting, and let’s just say I must be the luckiest darn person alive.

After an Ambien and a couple of more hours I felt myself fall into a delicious sleep, only subconsciously aware of giant heavy footprints outside of my tent, but very close to my head. Was it a good thing that Lucy began barking loudly to rouse me, but also to chase off a herd of what turned out to be big horned sheep? Not sure.

It was a long night for both Lucy and I. Unfortunately she could sense much more than I, so her constant unease, pacing, and occasional outburst of barking inside the large tent was not exactly soothing. She’s a city dog after all.

Finally she settled wearily on the sleeping bag, and I let her have it. 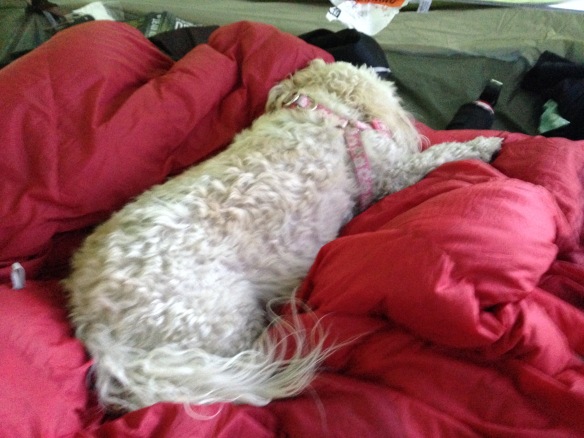 As I sat in my oversized tent going over all I had done in this day…I was finally able to move beyond whatever mistakes I had made, whatever sins I had committed (all that cussing), and I was left with a slowly burgeoning realization;  From what I thought was a little thing, I had accomplished something big. Really big.

I had pushed myself beyond any prior capability. I had accomplished my goal of reaching the camp, however unrealistic it had been. When I had a minute from pushing myself forward to take a look back, I had come a very long way.

A very big thing from something I thought was a small step toward a larger goal.

The next day I dressed into my white shirt that became black when I packed up my tent and belongings. I only had enough water (Lucy still had most of hers…but I couldn’t live with myself if I used it) for a cup of coffee or breakfast…so I had the cup of coffee.

The best cup of coffee I’ve ever had.

I belatedly realized I had not packed anything to brush my hair with, so I did the best I could with my fork (thank you Ariel) and carried on.

I made it down the mountain in record time. I suspect it was because I told myself I had to be down before Del Taco quit serving breakfast burritos. Whatever works.

And I made it down off of the mountain with a new realization that the next small thing may be the next big thing in disguise. And to never, ever, forget to celebrate your accomplishments….no matter the size.

You and your bad ass self are pretty darn awesome after all.

Until next time dearest.

4 thoughts on “The Next Little Thing”