As bucket list makers go, I’m pretty much a scaredy cat. When I was young, single, poor, and naïve I didn’t have a whole lot to lose, so I was game for anything.

As I got older, had children, bought a home, survived tragedies, and watched too many murder shows on the Investigation Discovery channel, my bucket list became increasingly safe.

Items like “Climb Mt. Everest” and “Bungee Jumping” fell off.

No real adventure. No real risk.

I’m good with it.

That being said, as I was reviewing items from my safe little bucket list, I realized that labelling some of them as just done wouldn’t do. There had been value added to quite a few of them.

VALUE ADDED = Experiences involuntarily added onto a bucket list item that I would have emphatically opted out of had I been given the choice.

Confused? Let me paint the picture.

This is a bucket list item I was living – Spend the night in a lighthouse.

Pretty straightforward eh? Here comes the value added part….wait for it…..WITH A GHOST IN MY ROOM.

You see what I mean now?

I imagine that if God had said to me while I was planning this trip, “While you are spending the night in a lighthouse I would like for you to have a ghost in your room”, I would have politely replied, “No thank you God”, and promptly cancelled my entire trip.

In fact, I would cross that item off of my list and stayed as far away from any opportunity to spend the night in a lighthouse as I could (this wouldn’t be hard, nobody has ever knocked on my door with an invitation to do so).

Luckily, I wasn’t given the choice and things occurred the way they were supposed to. It enriched the tapestry of my life with a thread that I wouldn’t have used. Would I do it again? Heck no…well maybe, but that’s a story for another time.

Need another example? Ok, I have more than a few of them…

Not unusual. This is a pretty common one. But here’s the value added…

IN A CONVERTIBLE MUSTANG BY MYSELF.

Nope, no thank you. I don’t want to experience something like that alone, and I’m scared to travel that far by myself. I’ll pass on the alone part, but I’ll add the convertible Mustang part to the safe item.

That’s what I would have said, but it happened. So far out of my comfort zone that I’m still shocked I did it.

This single value added bucket list item provided a unique experience that left me enriched, empowered, re-acquainted with myself, memories of not only vistas that are indescribably beautiful but people as well, and at peace with my involuntary retirement and the health issues that put me there.

And to think I would have chosen to skip it.

Are you beginning to pick up what I’m throwing down here?

No? Here’s another one… 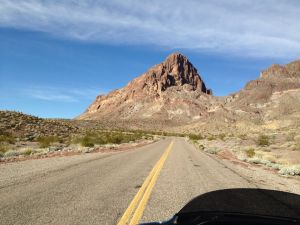 Travel Route 66. Another predictable and relatively safe bucket list item…but here comes the value add…ON THE BACK OF A HARLEY DAVIDSON MOTORCYCLE.

Me? On the back of a Harley? Nooooooooo. I’m not a Harley type, I am afraid of motorcycles, I have trust issues, I get cold easily, it might hurt my joints, I don’t have any motorcycle boots, I don’t want to die.

Pick one, ‘cause these are all of the excuses I would have thrown out there to block this from being added on.

But I would have missed the incomparable experiences that went with it, not the least was to put a much needed shot of youth/excitement/togetherness into my marriage. And cute black boots. Really cute black boots.

Yes, I’ll admit there have been a few that still inspire terror and I am a tiny bit mad about…for example,

Swim with Dolphins – WITH A SHARK.

Camp in Yosemite – AND BE MENACED BY BEARS.

Snorkel in Anguilla – WITH A BARRACUDA.

But I lived. Barely. Such a city girl.

Now they are funny stories we tell after a shot (or three) of courage (I mean whiskey) to relive them.

Thank you God for knowing what’s best for us, in spite of us.

I still won’t knowingly add these little extras, but I promise to keep relishing them.