For me, there is nothing more peaceful than being lulled to sleep by the sound of the surf. Being awakened by it is just as good, which made bidding farewell to Pismo Beach difficult. I would happily be a beach bum there.

Onward to the day’s destination…Monterey, another favorite of mine.

I didn’t plan a long driving day as PCH to Monterey would present some of the most challenging driving on this trip. I had been over this stretch of Highway 1 before, so I knew what I was in for.

I didn’t hurry. That is one of the perks of traveling alone, no coordinating with who takes a shower when, who is and isn’t hungry, who doesn’t want to get out of bed.

It was entirely liberating to sit on my own deck with a cup of Keurig coffee and let the rising sun kiss me hello and good-bye at the same time.

I packed the pony, put the convertible top down, and began my journey anew. This is the only selfie I have ever taken because the joy of an epic journey in a convertible Mustang must be recorded….right?

The 1 and 101 converge in Pismo Beach and head inland to San Luis Obispo where Highway 1 splits off again toward Morro Bay. I love Morro Bay and have spent plenty of time there as a destination, so I don’t tarry. I would miss watching the sea otters though. I can’t get enough of them and they are plentiful here.

Highway 1 here is only for locals and pilgrims. There is a certain esprit de corps among travelers on this road, as we are all here for the same unique experience.

This place is special.

There is no way to adequately describe the splendor afforded by following alongside the Pacific Ocean in Cali. The sea provides an endless blue heaven while the sun plays all day on the water, the cliffs, the mist of pounding surf, the horizon, and occasionally behind lazy clouds. 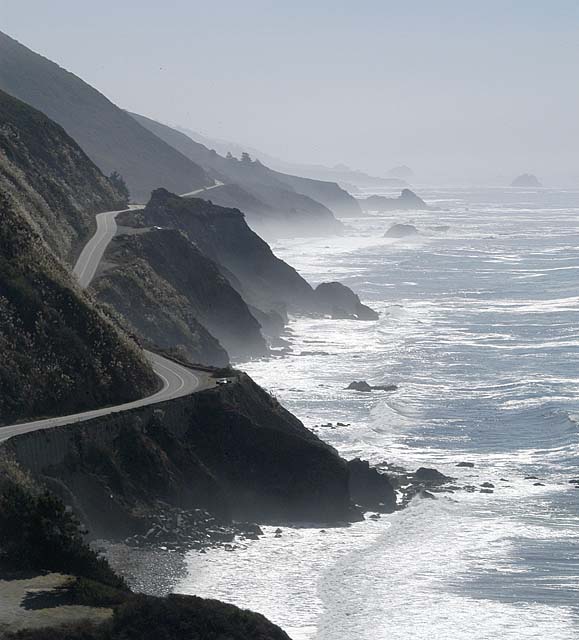 In spring, there is the added bouquet of flowers and blooming shrubbery. Surely God was in a particularly good mood when he created California.

Onward through Cambria and San Simeon.

San Simeon has been a destination in the past. Hearst castle is a place to be savored over more than a day, although the decadent display of wealth is troublesome, especially in the era it was built. It would be criminal to pass it up if I hadn’t already seen it though. 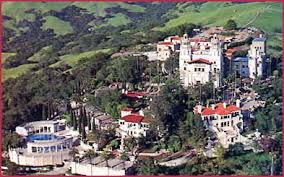 As a side note to anyone planning this trip, when they say that San Simeon is the last place to get gas, they mean it.

Onward to a new adventure…the Piedras Blancas Elephant Seal Rookery, 7 miles north of San Simeon. I was eagerly anticipating the opportunity to see these magnificent mammals up close. They were thought to be extinct, hunted tirelessly for their blubber, but a small colony of 20 survived the carnage in Baja California. Protected by Mexico, then by California, this colony started in 1992 with the birth of its first pup, and is now thought to be 8000 strong, though not all are ever on the beach at the same time.

The males arrive in late November and fight for dominance in anticipation of the females arrival in the coming weeks. I wasn’t too sorry I missed the violence, these guys can weigh 4500 pounds. They spend the rest of the year at sea.

The females arrive in December and give birth  to the pups they conceived the year before, then are impregnated again before the males depart in February. Both males and females fast while they are on land, and lose 1/3 of their body weight during this time.

In May when I was there, the pups had grown fat and strong, and both juveniles and females had returned to molt which I don’t mind telling you is a smelly business. The females argue constantly, grunt and complain when moving or turning in the sun, and male pups “mock fight” in anticipation of adulthood. It’s quite the cacophony of sound. 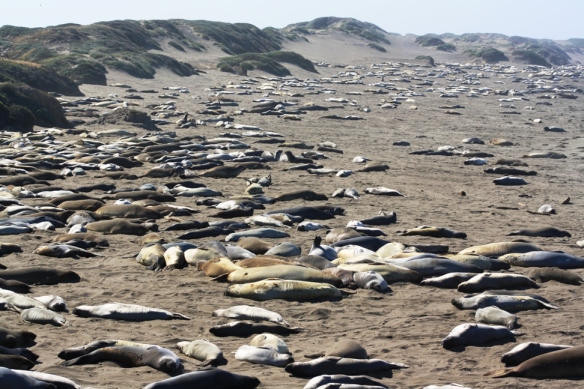 This little guy was the epitome of life on the beach. 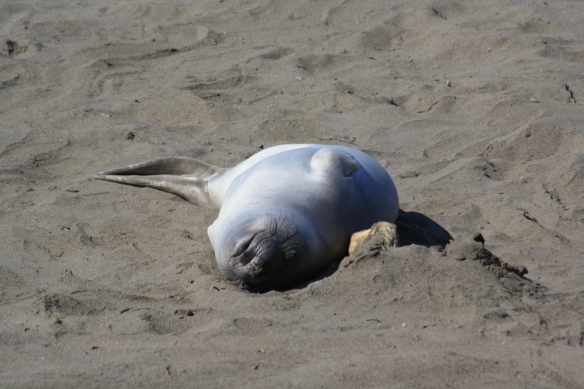 I hated having to leave. I still have the “elephant seal live cam” as a favorite on my laptop so I can check in from time to time.

With the increased health of Pinniped colonies all along the California Coast, the downside is the return of their chief predator, the Great White Shark. They say attacks on humans have not increased, but in light of what I had seen the day before at Surf Beach, I might argue the point.

The road gets challenging after San Simeon. I was mentally prepared for it, but not for the cyclists I encountered on every turn. I’m a little mad about the fact that they would ride 2 to 4 abreast on a road that is hardly wide enough for two lanes with no guard rails. Evidently they were competing or practicing or something in the “Tour of California” and oblivious to automobiles trying to navigate the treacherous turns, so consequently I didn’t get to ogle the vistas as much as I would have liked to.

I had already planned to stop at Julia Pfeiffer Burns State Park. Although I had seen it before, this piece of highway 1 is both visually stunning as well as historically fascinating.

The McWay Waterfall (or more accurately “Tidefall”, named for its first resident Christopher McWay in 1870) is probably the most visited and photographed image on Highway 1 in the Big Sur area. The 80 ft tidefall used to poor straight into the ocean (one of only a handful in the world), but a massive fire in 1983 and subsequent landslide forced enough debris into the cove to create a beach. The water now only falls into the ocean during high tide. This is not my photo, the fog was rolling in when I took mine.

This cove in December and January plays host to migrating whales that come very close to shore here. I intend to sit and watch them someday (maybe only in my dreams).

Most tourists fail to notice the ruins of a house directly behind where they stand to take their waterfall photo at the overlook.

The stairs, terrace, and non-native palm trees are all that is left of the “Waterfall House” built by Lathrop and Helen Brown in the 1940’s (who bought Christopher McWay’s Ranch). The house and rail car to the house (tracks can still be seen by the ruins) was powered by the Pelton Wheel which can also be seen on this trail.

Helen Brown and Julia Pfeiffer Burns were unlikely but fast friends in this remote area of Big Sur. Helen was a New York socialite where Julia was a hard working second generation pioneer of the area. When Helen Brown deeded the area to the State of California, she stipulated that the Park be named after Julia, and the house become a museum by a specific date or be torn down. The State did not meet the deadline and the house was demolished.

Perhaps Helen knew that she would be remembered for her wealth, but Julia would be lost to obscurity if not for the Park named for her. If nothing else, this place stands as a tribute to an enduring friendship.

There is something magical about the Redwoods meeting the sea, which makes it very hard to leave this place.

Onward to one of the only points on Highway 1 that made me just a tad nervous. I can’t tell you why it did, but perhaps being suspended this high in the open air of the convertible over ground that I (as a resident) am suspect of moving at any given time, could have contributed.

Since it was built in the 30’s, the Bixby Bridge has stood its ground, and lucky for me continued to do so as I crossed it.

I had already spent time in Carmel by the Sea. I am a little mad at the people who get to live here, but not Clint Eastwood.

The Carmel Mission built in 1771 is marvelous and having stood the test of time, should not be missed.

I have been here before to enjoy Carmel’s beach, shopping and history, so I continue on Highway 1 inland (bypassing the peninsula and snooty golf courses) to Monterey. 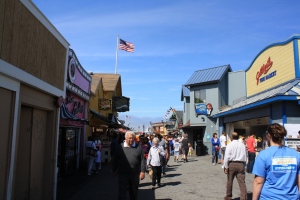 I checked into my hotel and set out on foot to Fisherman’s Wharf. I had been here before when my youngest was small, so many fond memories flood my mind as I walked the wharf. It was crowded with tourists and I was missing my family, so after fortifying myself with clam chowder in a bread bowl while watching the harbor seals, I headed out for parts unknown. For a first timer, I would recommend renting one of the pedal carts and traveling down the coast to cannery row and the Monterey Bay Aquarium.

I was not a first timer, so I headed down the back streets to Old Monterey. This is a brave move for skittish me.

This was where I had the most delicious moment of traveling alone thus far. I could shop and not have at least 3 other people (my kids and husband) telling me to hurry up or no we don’t have time.

I bought a delightfully bohemian skirt (that I have yet to wear, but I’m gonna) in one shop and a touristy fleece lined, pink, hooded wind breaker at a deep discount. I indulged in salt water taffy at a candy store, don’t tell the dentist.

Does it get any better?

I had a few hours until sunset so I languished here among the locals. I savored the Saturday rhythms of life here in the shadows of glorious architecture. Guitarists at an outdoor cafe, folks in line at a theater with their excited anticipation of what was ahead palpable, transients at every corner exuding a certain quiet desperation (but I didn’t feel threatened) mixed with the obviously wealthy patrons of restaurants and specialty stores.

I had to hurry back to my hotel to make it before the sun dissolved into the ink of night. I’m not so brave as to loiter after dark in an unfamiliar city. Even in a familiar city for that matter.

This is the only place on my Pacific Coast Highway trip that my accommodation was not seaside, but there was a pool and Jacuzzi just below my room that was calling my name. I suited up and headed down to soak my aching feet, and met one of the most interesting of the many fantastic women I would encounter during this adventure (even one that was specteral, see A Ghost in My Room if you can’t wait until day 6 of this trip).

This soon to be college graduate confirmed what I suspected about Monterey. It is a city made up of haves and have nots, with no room for the middle class.

She was melancholy because she was moving back home to Hollister California instead of Maui where she really wanted to start her life. Why wasn’t she pursuing her dream? Turns out, she just needed permission. As a 55 year old woman who had not pursued her dreams, I gave it to her. The 3 hour conversation we enjoyed altered the course of her life, and I can’t help but believe was meant to be.

I returned to my room, stoked up the fake fire in the real fireplace, and drifted into a tranquil sleep (despite the absence of surf).

Until next time dear diary…day 3 takes us over the Golden Gate Bridge in San Francisco to Gualala California. The longest (and what would become the most challenging) drive of the 7 day trip.